Blurring the Lines in Education Design: K–12 to Higher Ed to Corporate America

Blurring the Lines in Education Design: K–12 to Higher Ed to Corporate America

Over the last decade, plenty has been written about the evolution of collaborative workspaces in Corporate America, while the blurring of lines between design for education and Corporate America has remained under the radar. Comfort has been introduced with collaborative work from an early age so that the work style naturally progresses from kindergarten to the workplace.

In some ways, the rigid rows of desks that made up typical classrooms of years past were designed to prepare students for cookie cutter environments and similarly rigid norms in the workplace. Meanwhile, today’s adaptable “plug-and-play” workspaces prepare students for extensive teamwork in a highly collaborative work environment. 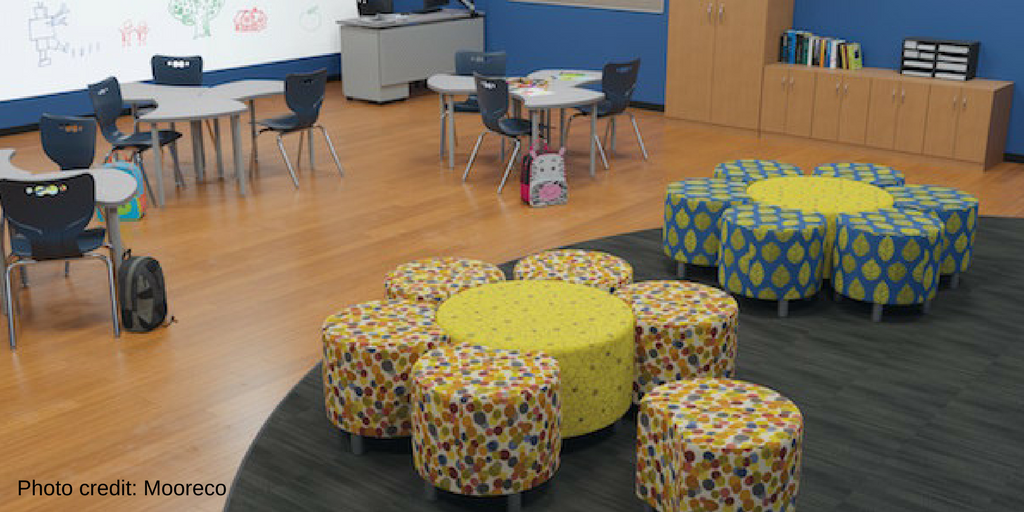 Starting at the Beginning

Instead of having a traditional “front of the room,” today’s K–12 classrooms tend to have several focal points, as well as seating arrangements that focus on small groups. Beyond that, most modern classrooms have flexible soft seating areas where students can get comfy to read, discuss a topic or participate in small group “target time.”

There’s more than meets the eye with these innovative education design elements. Today’s classrooms are designed to support current standards and curricula norms. Instead of  grouping students based on low, middle and high achievement levels, classes are now blended to utilize small, specialized groups to meet the needs of all students. Because all members of the class are working together, and no one is singled out for positive or negative reasons, students learn from one another and rally together.

Even typical desk shapes have changed. New desks are shaped like puzzle pieces and can quickly be arranged on the fly throughout the day, every day. Aside from shape, elements such as casters make classroom transitions easy, which are great ways to keep students engaged.

Common areas such as libraries/media centers and makerspaces support the same pillars of active, team-based learning. As students progress from primary grades to middle school and high school, they are almost certain to learn in makerspaces. But learning by doing isn’t limited to the classroom. Internships are beginning earlier, with high school starts becoming the norm. This dynamic helps students decide on an area of specialization earlier.

Once students reach higher education, classrooms and common spaces begin to look more like workplaces. Environments such as extensive common spaces, smaller libraries and far fewer large auditorium classrooms demonstrate how the footprints of buildings are shifting. For example, sprawling libraries have been replaced with space-efficient versions surrounded by casual but productive communal spaces. In addition, benching systems are finding their way into classrooms, lending a very corporate feel to many spaces. 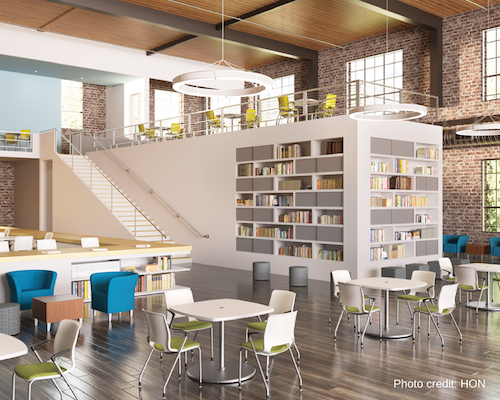 In an educational environment where urban colleges are more prevalent, institutions are forced to maximize the usefulness of the precious space that is available. Mirroring non-education trends in urban planning, the sharing economy is alive and well in today’s higher education spaces.

When it comes to classrooms, more and more are designed to be plug and play so that an engineering class can easily follow a philosophy class — a huge departure from the previous model of buildings specialized by discipline. Another example of flexibility is using dividing walls to allow smaller classrooms to be combined into a larger classroom when needed.

Generous common spaces are designed into every nook and cranny of today’s campuses. This includes academic buildings, residence halls and traditional common areas such as student unions and cafeterias. Common spaces are shrewdly outfitted with comfortable but functional soft seating, which is designed to allow lounging on every square inch — with ample charging built in. Standing desks also inject an element that is commonplace in corporate culture. These spaces are where students tend to meet to huddle up with groups for collaborative work.

Begin with the ending in mind: Corporate America

As today’s young adults enter Corporate America, they should be quite comfortable working collaboratively and in adaptable spaces. As is the case with classrooms, workspaces are allowing more space for communal areas where teams can have ad hoc huddles to move projects along — often just feet away from employees’ desks.

In the case of businesses, the main driver for the plug-and-play imperative is to be able to seamlessly shuffle the use of spaces. In the past, if a department within an office needed to move location, a fairly extensive renovation was usually required to outfit the space for a new department. With today’s plug-and-play norm, a new department can be moved into a space almost effortlessly.

The extensive use of technology across education levels and Corporate America is undeniable. Even in kindergarten, it’s common for kids to start their day by picking up their tablets from a group charging station. As they move to middle school and beyond, tablets become streamlined laptops such as Chromebooks and Surface devices. Increasing amounts of routine classwork and homework is done online, preparing students for the norm of business being conducted digitally in the working world. In fact, students have the added benefit of inherently understanding the need for standardization of hardware and applications for easy access to data — whenever they need it.

There are three leading themes that recur again and again across education and the corporate world:

What other observations have you made about the blurring of lines between education and the corporate world?

Subscribe and receive the hottest tips, trends and ideas in quality office furniture by email.